With miles of fresh water and ocean habitat all around, Charleston has a long tradition as a great fishing location, and anglers can enjoy a wide variety of challenging creeks, rivers, estuaries and sea beds that attract considerable numbers of species.

Offshore, the south Carolina coast is a flourishing feeding ground for pelagic fish, and has been enhanced by miles of artificial reef created by the state Department of Natural Resources. Old ship hulls, aircraft, military vehicles and other scrap metal has been sunk at different depths and distances all along the coast to attract invertebrates on which so many fish feed.

Among the favored catch for offshore anglers are Bluefin Tuna, Mahi- Mahi, Wahoo, Tilefish and Amberjack in deeper waters, with Tarpon, Sheepshead, Spadefish, Cobia in more shallow areas. The favored method is trolling with baits such as Menhaden, attracting species that hit hooks hard and draw numerous runs, providing a thrilling experience and quite a trophy at the end of the line.

Along coastal beaches, marshes and inlets, the Drum, Kingfish, Perch and Seatrout are abundant near Charleston, and a huge favorite among long- time local anglers. One of the favorite fishing methods is from secluded beaches on uninhabited barrier islands, where anglers cast heavy tackle into the surf. Another popular style is fly-casting for these salt-water species, by pushing flat boats by pole into shallow estuaries and locating pods of feeding fish that stir the placid waters. The range of the fly rod allows remarkable accuracy and distance in reeling in a great catch.

Fresh water streams, rivers and lakes are abundant, too, with several varieties of Catfish, Bass, Shad, Bowfin, Perch and Crappie. The American Shad is an especially popular fish for anglers as it makes its annual migration from the Atlantic Ocean to inland spawning areas each Spring. Massive Shad weighing up to 7 pounds are prized for their eggs, or roe, which is a traditional dining delicacy in coast South Carolina.

The Department of Natural Resources also regularly stocks estuaries and rivers with fingerlings to bolster species, and has encouraged a very successful tag-and-release program that allows anglers to enjoy the catch without killing the fish.

There are numerous charters and fishing guides for salt and fresh water species in the Charleston area, and the state DNR offers up-to-date online fishing trends information at www.dnr.sc.gov/fishing.html 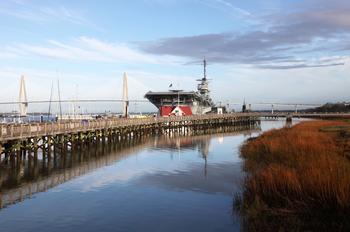