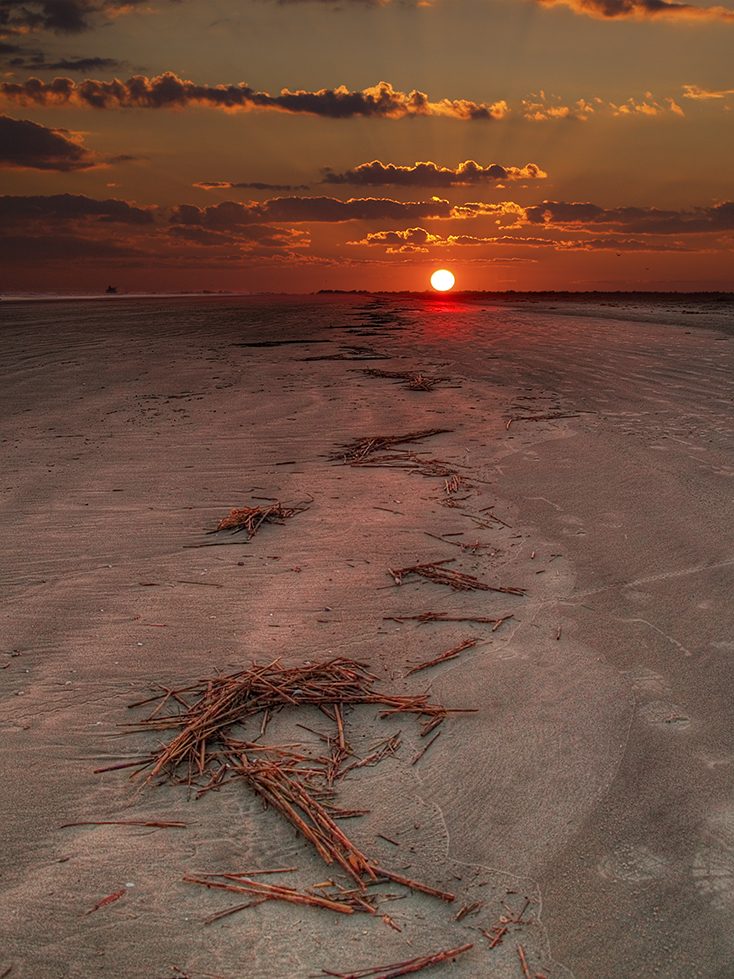 Charleston is surrounded with beautiful and easily-accessible beaches. Just north of the city, within 20 minutes drive are Sullivan’s island and the Isle of Palms, and to the south, Folly Beach is a 25-minute drive with Edisto Beacha little further about one hour away.

Sullivan’s island is a three-mile stretch of pristine oceanfront barrier island that is mostly residential, with many grand houses on half-acre lots that were carved out in the 19thcentury. “The island”, as it was once called, was Charleston’s first resort area, dating back to the 1820’s, when the first steam barges took city residents to the sea. By the 1830’s the first seashore hotels were opened, and became famous for weekend “hops”, where Charlestonians danced the nights away to orchestra music. After the Civil War, the first trolleys were established on the island, stopping at numerous “stations”, which are still the names for north-south streets throughout Sullivan’s Island.

Many grand historic houses on Sullivan’s Island date to the 19th and early 20th century. The excellent old-growth timber of coastal South Carolina proved to be ideally-suited for exposure to wind, sun and salt air, and still grace the island in areas such as the exquisite “Officer’s Row” along Poe Avenue. 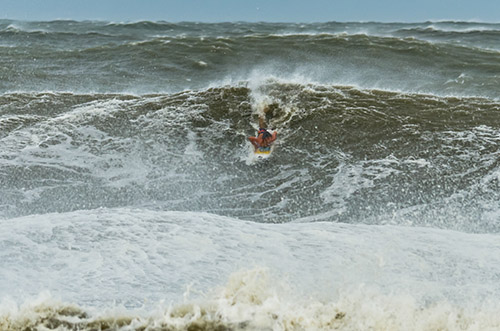 The Poe name comes from none other than famous author Edgar Allan Poe, who, as a young soldier in the U.S. Army, was stationed on Sullivan’s Island in the 1820’s. The significant military history of Sullivan’s island dates to 1776, when American soldiers built a fort along the entrance to Charleston Harbor to defend the city against the British during the Revolutionary War. The famous battle of Sullivan’s island on June 28, 1776, was a landmark victory in the quest for independence, and is still celebrated as the state holiday of Carolina Day. The fortification that later became Fort Moultrie was a crucial factor in the Civil War, and today is part of the Fort Sumter National Historic Monument.

Although still bristling with historic cannons and fortifications, Sullivan’s Island is blissfully peaceful and family-friendly, as quiet streets and sun- splashed sand dunes beckon with relaxing breezes and the sensuous sound of pounding surf. Golf carts and bare feet are standard in a beautiful landscape filled with blooms of hibiscus, crepe myrtle, bottlebrush, and oleander, with song birds and pelicans floating overhead, and always the restless breeze rustling through banks of sea oats and stately oaks and palmettos.

Just across Breach Inlet is the Isle of Palms, once known as Long Island because of its six-mile stretch of perfect beach sand. Developed for the first time in 1899, the Isle was planned to be the “Coney Island of the South”, but largely became a relaxed residential neighborhood for those who enjoyed the open spaces and the sea. Some parts of the Isle of Palms are more commercial than Sullivan’s Island, including a long-favorite oceanfront strip of restaurants, shops and beach. The Isle also features the Wild Dunes Resort, with world-class golfing, marina and hotel facilities, as well as beautifully-planned private homes. Where Sullivan’s island is more grandly historic, the Isle of Palms is a mix of tradition and upscale modernism, with classic older beach houses in classic timber tongue-and- groove as well as ultra-upscale homes appointed with opulent marble and glass for the ultimate waterfront showcase. 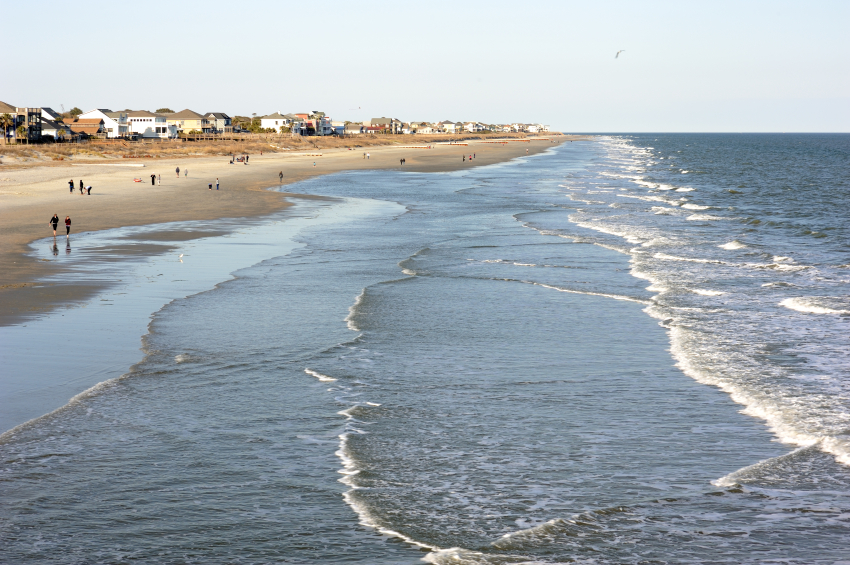 Much of the Isle of Palms was carved from old maritime forest and pristine wildlife habitat, and nature still rules along an island where dolphins splash in tidal creeks along miles of inland marsh estuary on one side, and giant sea turtles wade ashore and lay eggs among statuesque sand dunes facing the sea.

A walk along the long stretch of sparkling sand is a relaxing retreat into nature’s aura, and whether plucking sand dollars from the foaming surf or watching sea birds glide effortlessly over tumbling waves, the mind is mesmerized.

Recreation lovers cannot get enough of the Isle, and among readily- available activities are kayak paddling, golf, inshore and offshore fishing charters, as well as variousways to enjoy riding the surf. One of the most captivity sports for participants as well as observers is the hugely-popular kite-board, in which riders jump the waves on small flat boards while propelled by giant kites. The daily spectacle of colorful kite sails, wildlife, and pounding ocean are part of the magnetism of this truly enchanted Isle of Palms.

To the south of Charleston, both Folly Beach and Edisto Island are blessed with natural beauty and distinctive personality. Folly Island was historically a wilderness of dense maritime forest, giant sand dunes and turbulent waves. Ancient Indian tribes foraged for game among its towering trees, and buccaneers and runaway slaves found refuge in its miles of winding creeks and marshes. There was no bridge or permanent settlement of the island until the 1920’s, when George Gershwin was among the independent souls who sought out Folly‘ splendid solitude to write the famous American opera “Porgy and Bess”.

Since then, Folly Beach has always had a special appeal to the unfettered, Bohemian spirit and is today nicknamed “The Edge of America”. Although exquisite beachfront houses now stretch along its four miles of oceanfront, and a bustling commercial center features upscale restaurants and fashionable shops, there is still an informal essence of barefoot beachcombers on Folly. Since the 1940’s, Folly Beach was an escape for the young at heart, with a bandstand and pier that were popular for decades of dancers, and a churning surf that brings back daredevils of each generation. Big band music, then rock and roll and beach music have echoed over the sands and waves along Folly through the years, and the focus was always fun in the sun. Today’s modern Folly Pier is a showcase landmark for anglers of all ages who catch red drum, croaker, porgy and sea trout, as well as the many others who just enjoy the stroll out over the incoming seas. Some of the best catching is done atop surfboards, as each Summer brings surfing contests in what is consider to be the best breaking wave action in the Southeast. 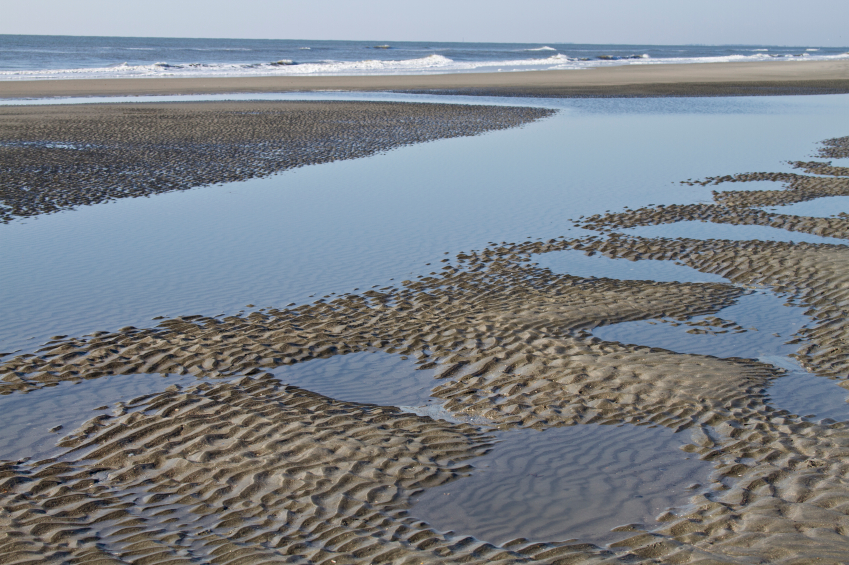 Folly Beach real estate is an eclectic mix of old and new, modest and ornate, as well as offering spectacular views of vastly different natural settings. Along the pristine Folly River on the inland side, oyster banks glisten throughout the swaying acres of golden spartina marsh. Just five minutes walk away, oceanfront homes overlook thundering waves and distant shrimp trawlers.

Although not much farther south as the crow flies, Edisto Island’s beach front is a good hour drive from downtown Charleston, but well worth the visit. This grand island is known for its stately antebellum plantation houses and historic farmlands that are still bountiful today. The beach at Edisto is old-fashioned sand and surf, with little to interfere with a day casting a rod and reel or just snoozing in a beach chair. There is little formality in the quiet, mostly-residential community, and for many years Charleston families have considered a stay at Edisto as a retreat from city life and city worries. 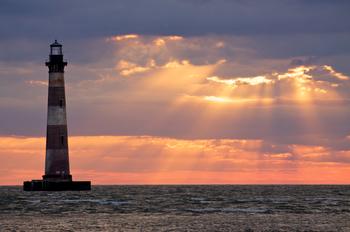